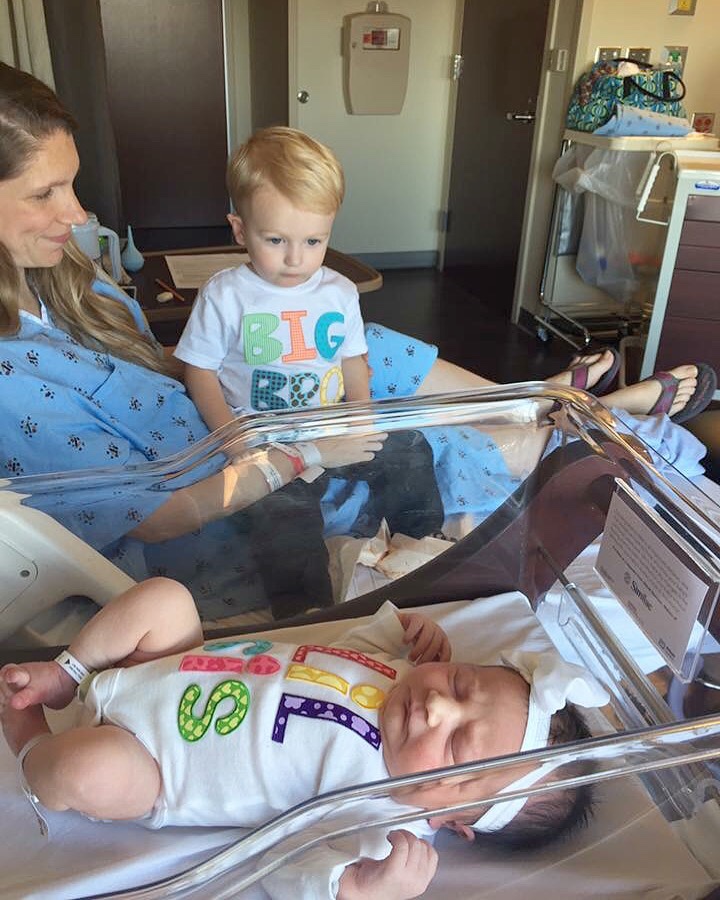 On December 21, 2016 I woke up with mild contractions. I had been walking around 5cm dilated for over a week so we knew baby girl could come at any time. My doctor had scheduled me to be induced in the early morning hours of December 22nd, but I just had a feeling she would come on her own.

As the day progressed the contractions were closer together. They were completely manageable, but definitely picking up pace. We made arrangements for our son to go to our neighbors house and went ahead and called the doctor. The doctor wanted me to go ahead to the hospital because they wanted to do an ultrasound before I went into active labor. After having issues delivering my son due to his size( you can read about that here) they wanted to try and estimate baby girls size one more time.

When we arrived at the hospital every single room except one triage room was full. We waited in that last triage room for a while before the ultrasound tech came in. She estimated the baby to be around 8 pounds 11 ounces. By that point I felt like my contractions weren’t as consistent so they let me walk the halls to see if I progressed at all before making a decision about keeping me or sending me home.

I hadn’t walked five minutes before the contractions started coming one on top of the other. We went back to triage and I had progressed to 6cm so we were being admitted! They asked me if it would be okay if the doctor broke my water and I said yes. (That’s a personal decision for everyone, and one that I felt worked best for me.) At this point I sent my husband to the cafeteria so he could eat in case labor took hours upon hours.

The doctor came in about five minutes after they checked me and right before she broke my water she informed the nurse that I had progressed to 8cm(in five minutes!) and they needed to get me to a delivery room stat. I texted my husband and told him to grab his food and get back up here because baby was impatient.

A delivery room opened up right about the time they were ready to move me and everyone was working frantically to get everything ready. About the time I got in the room things started to get intense. The contractions were coming one right after another and had become painful. I did my best to just breathe through the pain and remind myself that the pain was bringing me my baby.

There were two emergency c-sections and my doctor had been called into one right about the time I was beginning to feel some insane pressure. I got extremely hot, and nauseous which happened to me during my sons birth when I completed dilation. The doctor was still in the c-section so I decided my husband needed to YouTube videos on “how to deliver a baby” because I was certain he was going to need to do it. That was a firm no from him so I decided I would just delve into my labor and delivery memories from nursing school and deliver her myself because SOMEONE NEEDED TO GET THIS BABY OUT OF ME!

At the moment I told my nurse that I needed to push and I needed to push now the doctor came flying into the room and gowned up. Three pushes later and our Hadley Jude made her very fast entrance into the world. She was 8 pounds 4 ounces and had the loudest cry I had ever heard. She also had a head full of black hair which completely explained the magnitude of heartburn I had during pregnancy.

From the start of active labor to delivery it was just under 45 minutes. Everything about this delivery was completely opposite to my first. I only had to have a handful of stitches with her, and was up and moving within an hour. I had an epidural with my first and it was a welcome relief, and this birth was epidural free and I loved that experience too. I have two very different stories of labor and delivery and I love that. It reminds me that no two children are alike, and the way they come into this world are never alike either.

If you read my post, I Didn’t Bond With My Baby Right After Giving Birth, you know my girl and I had a rough start after her birth. With that being said it goes without saying she is and was so loved. We cannot hardly remember what life was like before her. She has been such a light these last two years, and I am so honored that she picked me to be her mommy.

Thanks for stopping by!